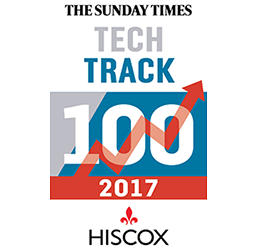 We’ve made our debut appearance in the definitive ranking of Britain’s fastest-growing private tech businesses.

We’re delighted to have made our first appearance in the 2017 Sunday Times Hiscox Tech Track 100 – and we’ve landed within the top 25! The highest-ranking marketing technology company in this year’s league table, we’ve come in at 23rd place, thanks to our 125% growth rate.

The league table ranks Britain’s 100 private tech (TMT) companies with the fastest-growing sales over their latest three years and has continually been a bellwether for the next big successes in UK tech. Alumni include success stories such as King, Just Eat and Zoopla among hundreds of companies who have gone on to IPO and beyond. We’re delighted to be in great company in this year’s report, alongside exciting tech companies such as Wonderbly and Darktrace.