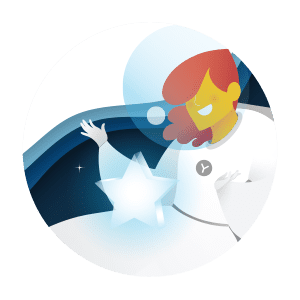 The Winners of the 2018 Fireflies have been announced

The eleven winners of our first annual awards program, The Fireflies, have been announced! These awards recognize excellence in customer journey optimization among our 500+ customer base across the world and we’re delighted to share with you the amazing work that earned this year’s winners their trophies.

In 2018, Philips sought to extend its work with Yieldify to personalize journeys across the full customer lifecycle. From growing its email database in the wake of GDPR to increasing customer acquisition, the broadened scope of its campaigns is reflected in impressive results.

Among the key campaigns of the year was the Speedpro Max competition. This competition mechanism meant that only 10 passwords would unlock free products; those who didn’t win were offered a 50% off discount, increasing engagement and conversions.

However, Philips’ activity wasn’t just about driving directly to conversion. This year, the company made use of Yieldify’s new Dynamic Social Proof feature on popular product pages to invoke a sense of FOMO and urgency to purchase. It also introduced new formats such as bottom bars to vary the experience across the customer journey.

The numbers are set to go beyond 2017’s impressive figures, where over 5000 new leads were generated as part of an aggregated 29% conversion rate uplift across all markets.

Over in the US, new client, Midwest Sports utilized and tested a variety of Yieldify’s targeting and triggering capabilities to gain a better understanding of when and where campaigns are most successful.

The success of the strategy has come from a commitment to detailed testing, driven both by data and behavioral observation, iterating on learnings as the year progressed and data aggregated.

One key example is in learning what kind of content resonated with visitors. Rather than simply defaulting to discounting, Midwest Sports took the approach to test Yieldify’s Dynamic Social Proof feature (showing the number of visitors engaging with a certain product) among other types of content to see what performed best. This strategy led to the development of product alerts and other content focusing on either a social recommendation or expert advice. 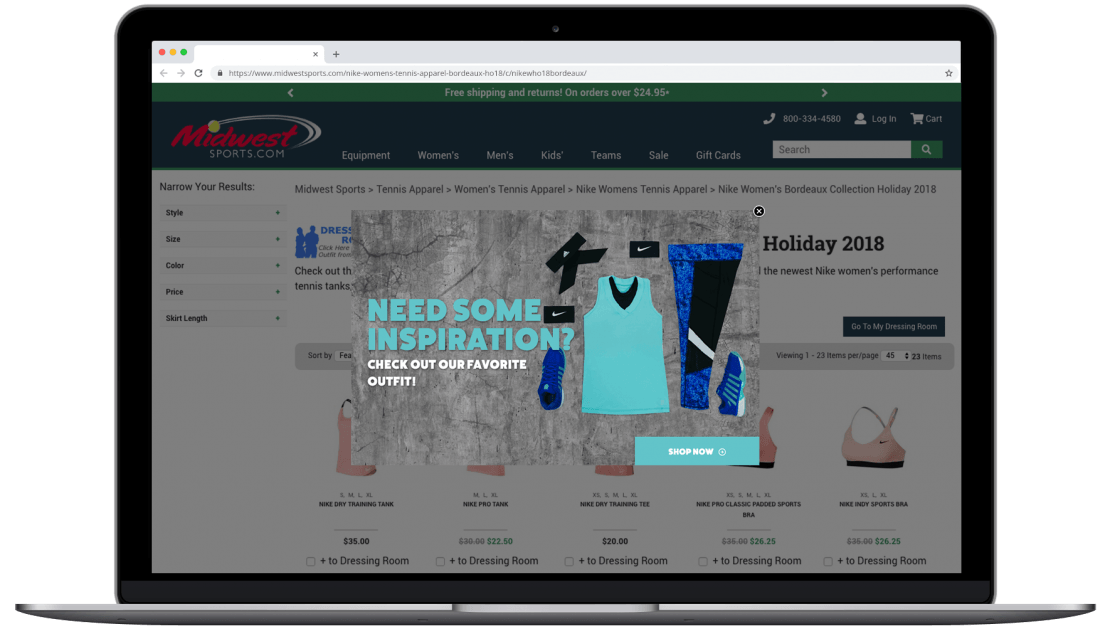 A second approach was in testing the timing of engagements – crucial for lead generation in particular, as asking for a visitor’s data at the optimum moment can make a major impact on the chances of conversion. Both mobile and tablet performance improved based on engaging with active users rather than waiting for users to show exit intent.

Launched in the run-up to peak trading for Avon, this campaign made excellent use of video content to drive engagement with a key product. Users engaging with the product were shown an overlay where a YouTube embed of the product’s ad showed them a contextualized, lifestyle-driven view of the product: 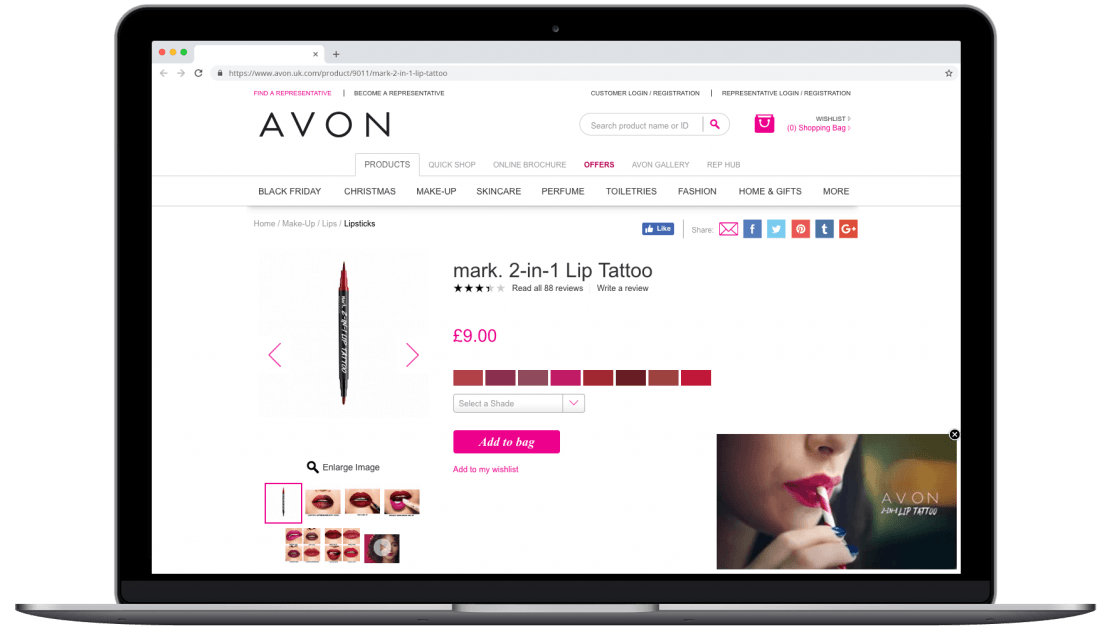 The use of a high-quality piece of brand content is particularly important in beauty, where the importance of brand is at its most critical. The initial results indicate an impressive uplift of 20.8%

Over the course of the relationship with Yieldify, Virgin Trains has sought to learn the right combination of personalized touch points throughout the Customer Journey to improve onsite engagement.

Yieldify partnered closely with Virgin Trains, its Product and Optimization teams and external partners such as Webcredible and Merkle to ensure that every consideration was in place to limit risk and maximize the customer experience.

According to the Virgin Trains team “the Yieldify tool has been really useful for us to message customers in a personalised way quickly. With the promise of extensions and in-page formats in the future, that unleashes an incredible amount of power that we didn’t have before” 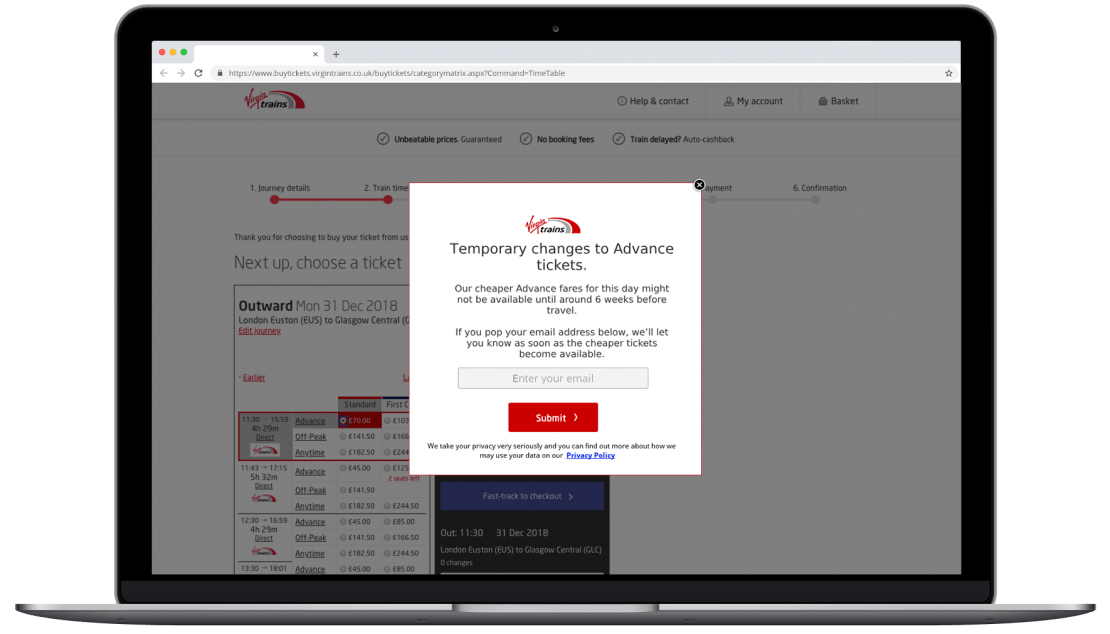 2018 saw Virgin Trains work in even closer collaboration with Yieldify than ever before when the team began driving their own campaign creation through the Yieldify Conversion Platform. Over the course of the past few months they have self-built over 100 campaigns, and now see the tool as a crucial extension of their site, allowing them to deliver on their personalization goals.

The Argos Pet Insurance campaign sought to prevent abandonment outside of the quote funnel through use of special offers. In the course of running the campaign, Argos and RSA were looking to learn how personalization at the start of the funnel would impact conversions later on, and also test how value propositions would move the visitor through the funnel.

The brand was faced with several challenges both inside and outside of the quote funnel. One of the key challenges was building trust for those new visitors looking to ensure their pet for the first time with Argos Pet Insurance.

Through testing, Yieldify and Argos identified that each step of the quote funnel required a different action to improve engagement and encouragement to the next step. This was tested using a variety of triggers and formats, from notifications to full-size overlays on quote abandonment.

In the course of running the campaign, Yieldify influenced the introduction of concepts that would later be built into the fabric of the website, such as “X amount of time left” to secure a quote. The learnings gathered could then be utilised across the rest of RSA group to help drive more personalised experiences and reduce funnel abandonment.

The journey of the Year: soak.com

While designed to help drive conversion, soak.com’s journey had a second objective that was just as important: using the insight to understand how expensive PPC traffic responded to different messages.

The campaign was constructed to ask PPC traffic who were exiting from radiator category pages what they’d been looking for. The overlays included three calls-to-action: the option to shop by style, by room or by colour.

On the one hand, it helped ensure that traffic acquired at a high cost would not be easily lost. In this respect, the campaign continues to help drive conversion rate increase. On the other, it also helped the team at soak.com improve their understanding of their user experience and gauge the success of their PPC campaigns in driving users of high intent.

Thomas Cook Airlines and Condor were one of the first of Yieldify’s clients to prepare for GDPR’s May 2018 staging date by incorporating explicit opt-in into their Save My Booking functionality.

This campaign was designed to mitigate against booking abandonment by offering the user the option to save their booking for later. This had previously sent emails without explicit opt-in – a strategy that would no longer have been valid under GDPR.

The new campaign that incorporated opt-in was first trialled on Condor before being rolled out across Thomas Cook Airlines. It triggered on exit to offer the user the opportunity to save their booking by entering their email address and explicitly opting in to re-engagement.

This campaign succeeded in engaging customers who were at high risk of being lost from the booking funnel, putting them on a journey towards conversion when they would otherwise have been lost. The GDPR-friendly approach also surfaced key learnings: whilst send volumes were smaller, the open rates, click-through rates and conversion rates were significantly higher.

With an increasing number of luxury brand consumers coming from markets in Asia, Montblanc needed to adapt quickly to the different nature of cross-border e-commerce.

This campaign was designed for the needs of consumers browsing from India. These shoppers have arrived at Montblanc’s site but would have been unable to purchase key items directly from the site – they would have need to go to a locally-based retailer. This campaign was designed to ensure that these highly-engaged visitors made it through to purchase without being lost along the way.

The overlay that triggered simply asked the question “Interested in buying this product?” and offered two CTAs: Continue Exploring and Shop Online, the latter leading to the local retailer to allow the visitor to purchase.

The campaign has run effectively for over four months to date.

Skyn ICELAND knows that the key to cross-selling successfully is to suggest value-added products that focus on the skincare needs of its visitors.

The campaign took the form of a notification that appeared at the bottom-right of the screen immediately when the user added Hydro Cool Firming Eye Gels to cart. 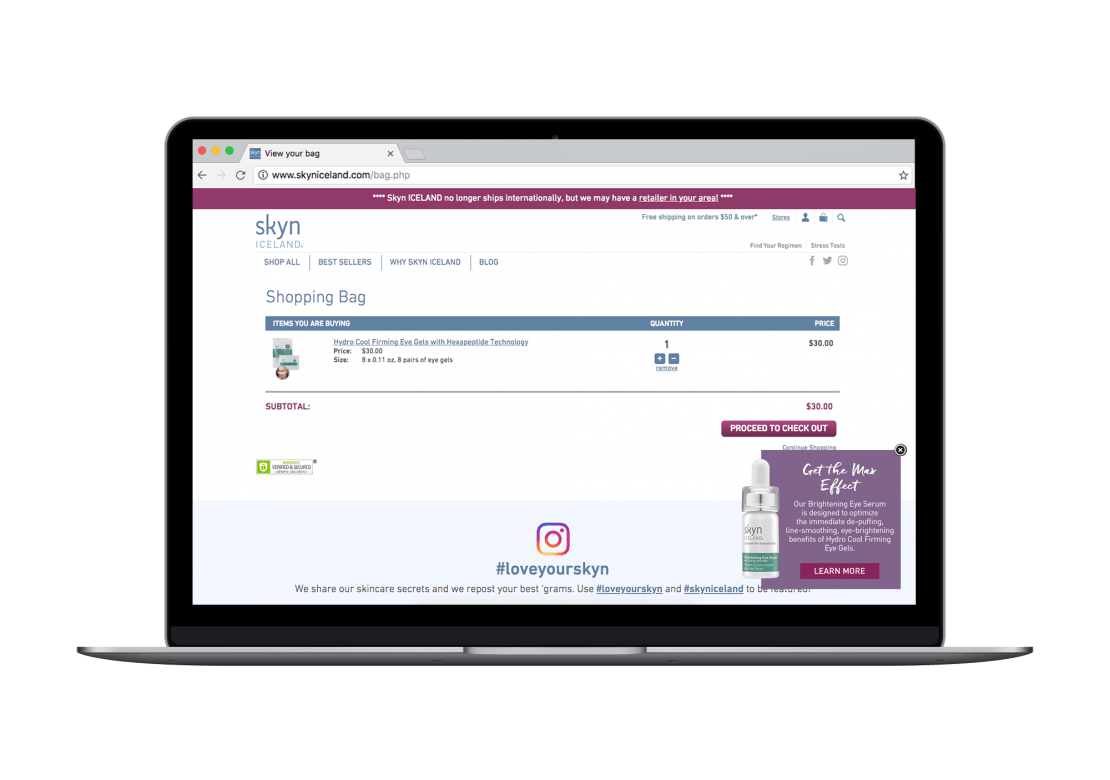 Providing more education on why this product would help visitors achieve their skincare goals resulted in a +23.1% uplift in conversion rate and boosted order value by 14.94%.

The goal of this campaign was to leverage a promotional video for a new Homair campsite at Val D’Ussel that had opened a new swimming pool and waterpark.

The campaign targeted users who were browsing the Val D’Ussel page of the Homair website. The campaign would trigger after 15 seconds, appearing as a side tab on the left-hand side of the screen, extending on click to play the full video.

Knowing the impact the video can make on conversion rates, this campaign made smart use of content in order to enhance the user experience. For example, the initial appearance of the video was discreet: it required a click to extend it and appeared without sound. This ensured that the visitor was given a clear option to engage but also that it didn’t disrupt the user journey if the user wasn’t interested.

The content of the video was also carefully chosen in order to ensure that it added value to the user experience. By delivering information and visuals of the new waterpark that weren’t yet widely present on the main website, it provided an experience that was useful as well as engaging.

This campaign brought Maybelline’s major brand campaign to life on the website, leveraging it effectively to drive leads.

The Make It Happen campaign had been launched in 2015, leveraging the brand’s New York history and cultural resonance to appeal to a new generation of independent, free-thinking young female consumers. The huge investment in the campaign stretched across all forms of media, leveraging key brand ambassadors such as Jourdan Dunn and Gigi Hadid.

The massive brand appeal in this campaign meant that using it to its full potential with website visitors held a huge opportunity. In creating an area of the website specific to the campaign, Maybelline’s use of Yieldify brought the campaign’s potential to generate leads to the front and center – literally.

To date, over 19,000 email addresses have been captured with an estimated lifetime value of $2.6M. This demonstrates the importance of the often-overlooked conversion goal of lead generation on e-commerce websites. While the pursuit of a sale often overrides softer conversions, the success and potential value of the Maybelline execution showed the immense value that can be found in the right lead generation CTA.

Congratulations to all the winners – see you next year! 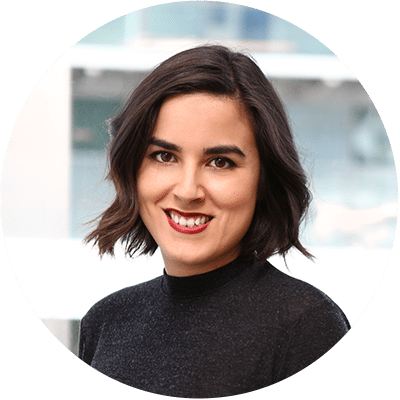 Get the latest tips and tricks on optimizing your customer journeys from Yieldify.